This is undoubtedly our best doubles game of Cricket so far. And we got the whole thing up on YouTube so we can relive all 20 rounds of this fluctuating soft-tip darts showdown.

Watch below as Whippet (AA) and Ricky Vaughn (C) team up to take on NBD regulars Bandit (B) and Trip McNeely (CC) in the most popular game on the Gran Board 3s, Cricket.

Trip got things rolling opening up 20s and 19s with triples in his first two darts. Bandit was consistently averaging better than 3 marks per throw, and when their opposition could only manage two marks in their first nine darts, this started off looking nothing like the classic encounter it turned out to be.

But enter Whippet who managed to drag himself and Rick back into the contest with a barrage of triples including hitting a three-in-a-bed in the triple 15. 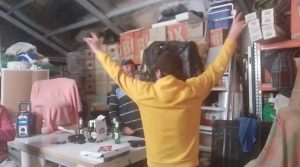 For those new to soft-tip darts and the Gran Board 3s, Cricket and 701 (or 501) are the two main competitive matches played throughout the world.

Each segment can be ‘opened’ for scoring by hitting it three times however once the opponent hits it three times it is then ‘closed’ and can no longer be scored on.

Or if you’re keen on joining us for a game online, get a Gran Board 3s of your own from our online shop.

Categories: Playing Darts
Tags: cricketGran Board 3sThree in a bedWhippet

Thanks mate, see you for a game online soon!

Well done Daniel.
That 3 in the bed saved the game👍🏻

Thanks Derek… was pretty happy with that, although looking back we got lucky that they didn’t go for 16s in the last 2-3 rounds.