Gran Darts surprised the soft-tip darts world this week when it announced the upcoming release of Gran Board 132, a new version of its much heralded Gran Board with a unique difference. 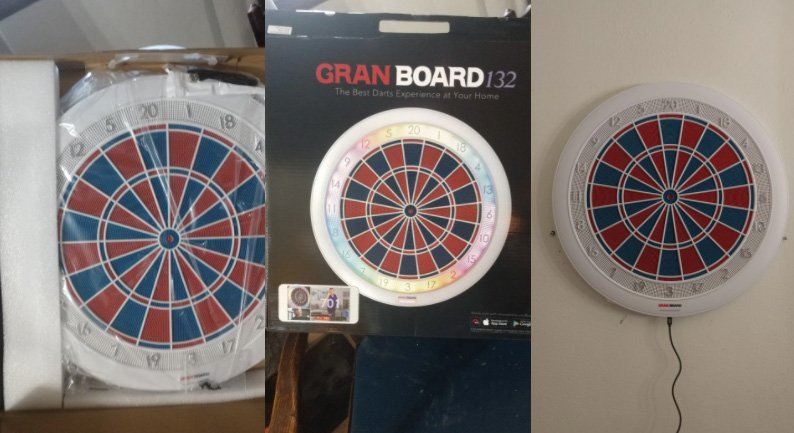 The first real pics of the Gran Board 132 have emerged via dartbrokers.com

The new board, which is likely to be available from Gran Board retailers in December 2020, will be an exact size match of a steel-tip dart board.

We’ve been told the intention is for it to be sold at the same price as the Gran Board 3s, however whether other retailers stick to that is anyone’s guess.

The biggest difference is in the triple, double and bull segments. The triple segments in the Gran Board 132 contain 20 holes for your dart to land in compared to more than 50 in the regular Gran Board.

The board will link up the Gran Board and Gran Camera app as usual however we’ve also been told that the play data that is managed on the app will be able to be separated from the stats for the regular board. So if you own both boards and use the one device, it will keep separate stats for each type of board.

The Gran Board 132 will come in one model only, which is the white frame with red and blue segments.

Interestingly, instead of using the normal Gran Board button (to end your shot) it will use a new sensor technology on the Gran Board logo at the bottom of the board. If successful, we’d predict that this would be used as part of the next standard Gran Board release. 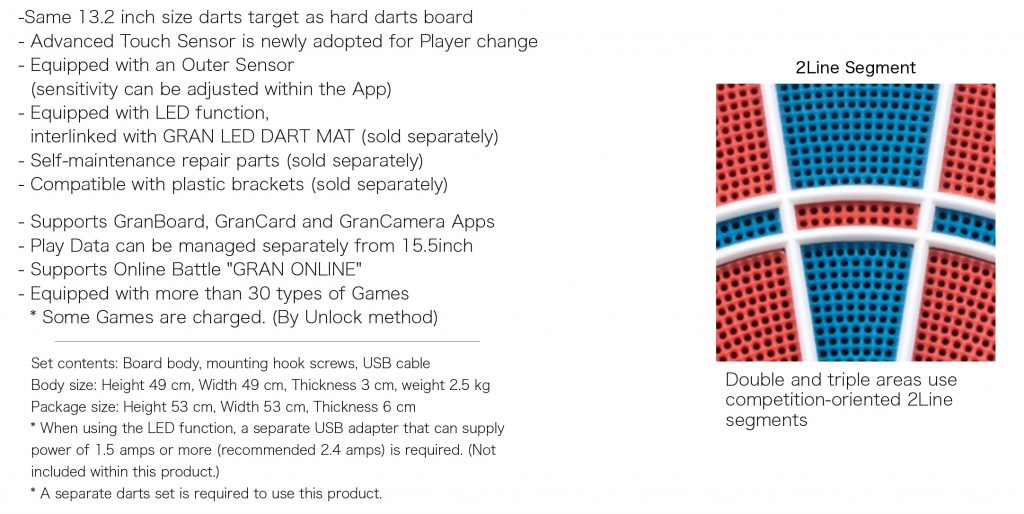 Initial opinions on how popular this new board will be seemed to vary among the regular Gran Board users on social media.

“I dunno why I’d want to make darts any harder than it already is,” wrote one user on the Gran Board online Facebook group. “And to make it worse you’d be playing against people with bigger boards and triples than you have so it’s not fair!”

But we’d say the true test of the board will not be among the current Gran Board users but among the keener steel-tip darts players.

The opportunity to throw at a board that can instantly set you up with a competitive game online against a real person must be very tempting for the steel-tip players. Not to mention the chance to be throwing without having to be calculating every dart score in your head the whole time.

A common knock on the soft-tip boards from steel-tip players was that it wasn’t true darts as the board, triples and doubles were all bigger and therefore not comparable. Now, if you can hit a 180 on the Gran Board 132, it’s as good as a 180 on your bristle board.

One issue might be that the steel-tip players will need to switch to a soft-tip dart to be able to use the board, and soft-tip darts are usually a bit lighter than steel-tip darts. However, with the majority of premium player darts being released in both steel-tip and soft-tip versions these days, there will be no shortage of options of darts available. The best part is when you find a set of soft-tip darts you like, they can double as your steel-tip darts as well by buying a set of steel points to go into them for when you’re throwing on the bristle board.

Here at No Bull Darts, we’ll have the opportunity to stock the ‘Gran Board 132’ in our online shop, so if anyone was keen to get hold of one at a good price from your local Australian retailer instead of ordering it from overseas, please let us know.