Bandit has kicked off the 2021 S.A Cup by getting disqualified under what we would have to describe as ‘controversial circumstances’.

Despite playing on their home boards, both Whippet and Bandit love to participate in the soft-tip darts competitions offered locally with Whippet now also playing in a weekly steel-tip competition.

The 2021 S.A Cup soft-tip competition kicked off this weekend hosted by the fine people at iDarts in the Adelaide CBD and Whippet and Bandit were both keen to bring home some silverware to add to the very barren trophy cabinet.

The competition started well with Whippet winning 1 of his pool matches and losing 1 (in a group of 3 competitors). The crew at iDarts have a fun incentive where if you hit any 9-mark round in your match (ton-80, three in a bed, white horse etc) you get a free beer! Whippet was lucky enough to score two free beers in his pool games! Legend! Sadly, his campaign came to an end in the quarter finals when he lost his knockout match to an opponent with a large handicap advantage. 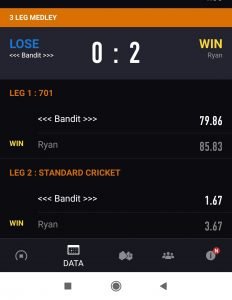 a loss for Bandit

Taking the loss on the chin, Bandit headed into his second match and despite losing the first 01 game, came home super strong in the last two Cricket games – also getting two 3-in-a-beds and scoring two free beers! The cricket averages were extremely high for a rating 6.8 with a 3.57 and a 4.0 but when you’re in the zone, you’re in the zone! It should be noted that at this point Whippet was yelling out ‘Where’s the Rating Police?’ in exuberant celebration. Little did he know what was to come… 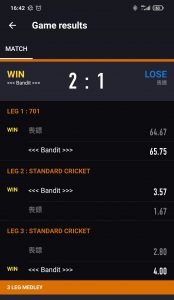 shaky start, but a huge game 2 and 3 secured the win 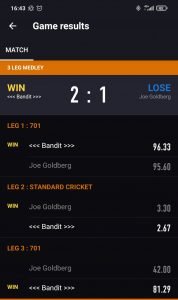 A win, but at what cost…

Whilst finishing off his beer, Bandit was then informed by tournament officials that his rating average for the day was 10.28 which was well in excess of the 3.0 leeway that was afforded to players in the BC division. This resulted in a disqualification for Bandit and meant he was not allowed to progress to the semi-finals or receive his well-deserved S.A Cup points. A travesty of epic proportions!

Whippet also talks us through all the stats and ratings here – https://nobulldarts.com.au/news/soft-tip-darts-stats-ratings-and-averages-explained-for-gran-board/

Understandably devastated, Bandit went home to drown his sorrows. Clearly all that throwing on the home Gran Board had paid off (Bandit only gets to throw once a week on Saturday nights – come play us in our group lobby “No Bull Darts” – password = 5000).

Being what Whippet defines as a “time-poor Dad” and not being able to physically get to iDarts to boost his rating had backfired for Bandit. The consolation prize of a free beer has certainly left a salty taste in his mouth and a hankering to play in stage 2 in May.

Watch this space to see how things progress. Bandit is still not sure whether to stick with the BC division (his rating has now gone up to 7.25 on the Dartslive system) or slog it out with a huge handicap in the AB division. Let us know what you think in the comments below.

Unlucky for you, poor bandit

I was recently talking to Steve Letts regarding this handicap and it’s pretty crap really, for him to win against a low AB player he needs to hit basically minimum 4 to win in cricket and starts sometimes 200 points less on cricket. Now most AB players can smash the bulls in 01 so an advantage that big is really a big big advantage. I personally played in the first (welcome) cup and cane up to a player whom I vaguely knew and his points advantage was 100 points and in cricket he had 5 marks already hit. Now this guy I usually best but often it’s close and I need to be on my game. With this advantage I lost to this guy, it doesn’t translate.

Have to agree with you Luke. If there were more players they could divide the groups into A, B, C, etc.
Whilst the handicaps do make things hard for the higher players, it is nice for the lower players to game a chance to win every now and then too!