Bandit from No Bull Darts has redeemed himself from a controversial disqualification earlier in the year by taking out the BC-division of Stage 2 of the SA Cup at iDarts Adelaide during June.

After the Stage 1 debacle, Bandit had something to prove going into Stage 2 of the SA Cup. His Dartslive rating had not changed from the 7.2 since the last time so being under 7.99 meant he still qualified for the BC-division.

There were far fewer players this time around so as a result there was only 2 pools with 3 players in each, meaning only one player from each pool would be eliminated after the round robin stage. In typical fashion, Bandit lost 0-2 in his first match posting some shocking stats to back it up. 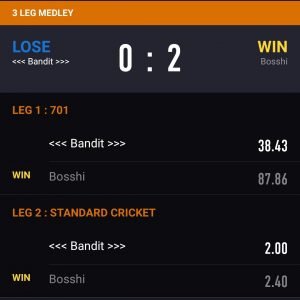 Taking on opponent number 2, Bandit put up a much better fight and won convincingly 2-0 (although the stats weren’t much better) 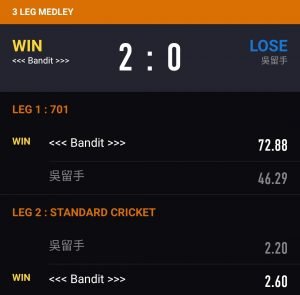 By winning this leg, it had assured Bandit a place in the semi finals. Finishing 2nd in his pool he had to play the first place winner of the other pool which was Todd. Once again, some very average stats but Bandit won the third leg convincingly to step into his first final vs Nick Stokoe. 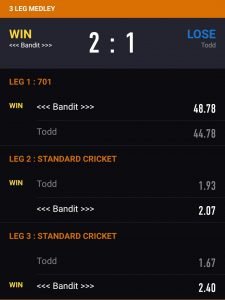 While this was all happening, Whippet was tearing it up in the AB-division. Throwing some amazing darts he swept through his pool finishing top and allowing him to bypass the quarter finals and go straight into the semi finals. Whippet then came through in a tight semi-final over Horace to make it to his first ever grand final appearance.

For the first time ever, No Bull Darts had representatives in both finals. The AB-division had Whippet up against Jacky whilst Bandit played in the BC-division final vs Nick Stokoe.

Nick has been a much higher rating in the past, but has recently acquired some new darts which has taken him some time to adjust to. This lowered his rating enough to jump into the BC-division and into the final vs Bandit.

The match started well with Bandit somehow getting the ’01 win despite having a lower average. Nick came back strong in the 2nd leg with a 3.00 cricket average. He then backed it up in leg 3 while Bandit’s cricket average plummeted.

Bandit worked hard in the 4th leg despite being below Nick’s average managed to close out the game sending it to a deciding 5th leg. Bandit won the cork and decided to choose ’01 (seeing as that was the only thing he could beat Nick at!). The match went to the final round, with Bandit stuck on 3 and Nick on 13, Nick needed to hit 11 to put the pressure on Bandit. He unfortunately hit 12 and ‘busted’, meaning Bandit would win based on finishing on the lower score.

Watch the dramatic final stages in the video below or on our facebook page.

Ironically, Bandit’s rating went down after the day’s events to a 7.10 highlighting his BC division status! 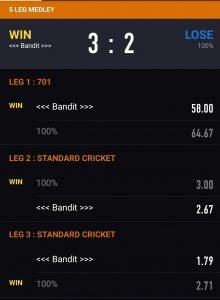 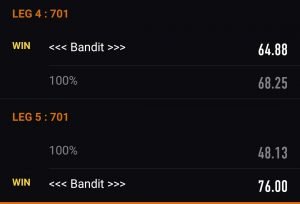 Meanwhile, Whippet fell at the last hurdle to Jacky, who has been a consistent winner in these tournaments over the past two years, finishing runner-up in the AB division. 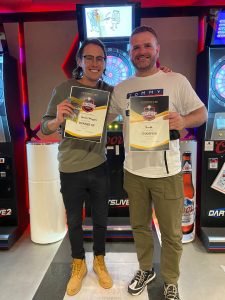 Whippet (left) and Bandit (right) show off their certificates after making the finals of the SA Cup Stage 2.

It wasn’t only that sweet redemption feeling Bandit went home with, he also collected $120 in cash for his troubles, while Whippet won $60. Both will be awaiting the final two stages of the SA Cup to see if they can qualify for the SA Cup Finals at the end of the year, which last year had a winner’s prize of $800.