Soft-tip darts stats, ratings, and averages explained (for Gran Board)

Whippet from No Bull Darts takes you through everything you need to know to fully embrace the stats, ratings and averages that are a huge part of soft-tip darts, and particularly the Gran Board.

The first thing that really hooked me into soft-tip darts was my Dartslive card.

I still remember Karl from iDarts Adelaide telling me I had just thrown an 01 average that was equivalent to being a Rating 10. Being a sporting stats nerd since I was a kid, I was intrigued. Within minutes, I had bought my first Dartslive card, downloaded the app, and the obsession began.

Now that I have a Gran Board at home, I have doubled my obsession. The Gran Board app (and Gran Card app, more on that later) is full of numbers that can keep even the most ardent darts stats lover busy for hours.

Having said that, I actually still think the Dartslive app is superior because you can look back at every match – who you played against, the average you threw etc – and see if you won or lost. But the focus of this article is the stats, averages and ratings on Gran Board because they’re the ones we play the most and are now selling in our online shop.

So let’s start with the stats that are provided in-game while you throw. In the top right corner of the display screen you will find the average you are currently throwing. In an 01 game (501, 701 etc) that will be your three-dart average (per round). So for example if you throw 70 in your first round and 50 in your second, your average will display as 60. 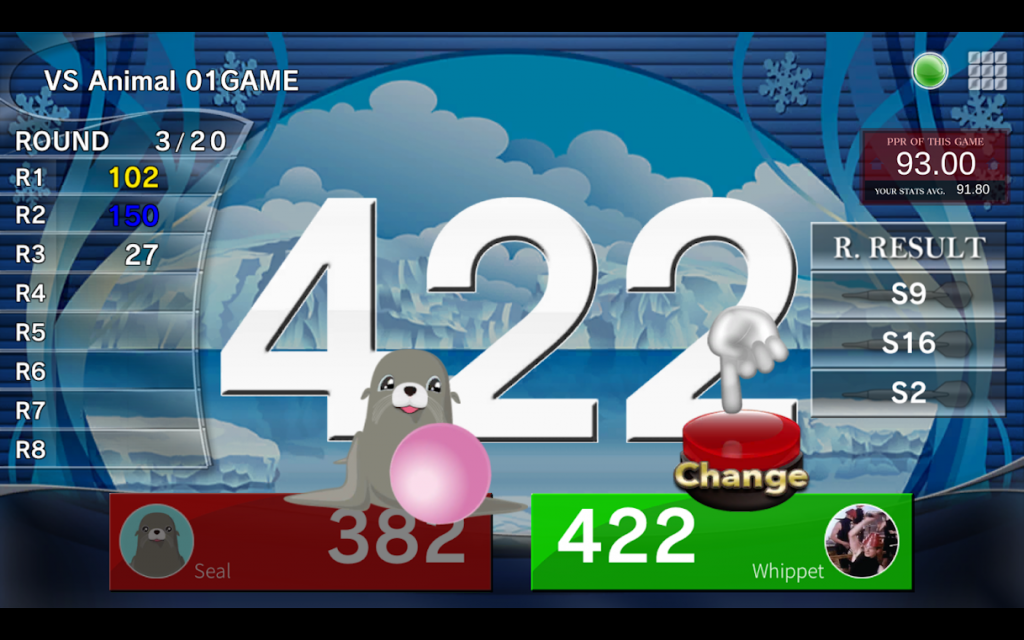 In the top right corner you can see my current average is 93. It is red as that is greater than my overall average of 91.8. 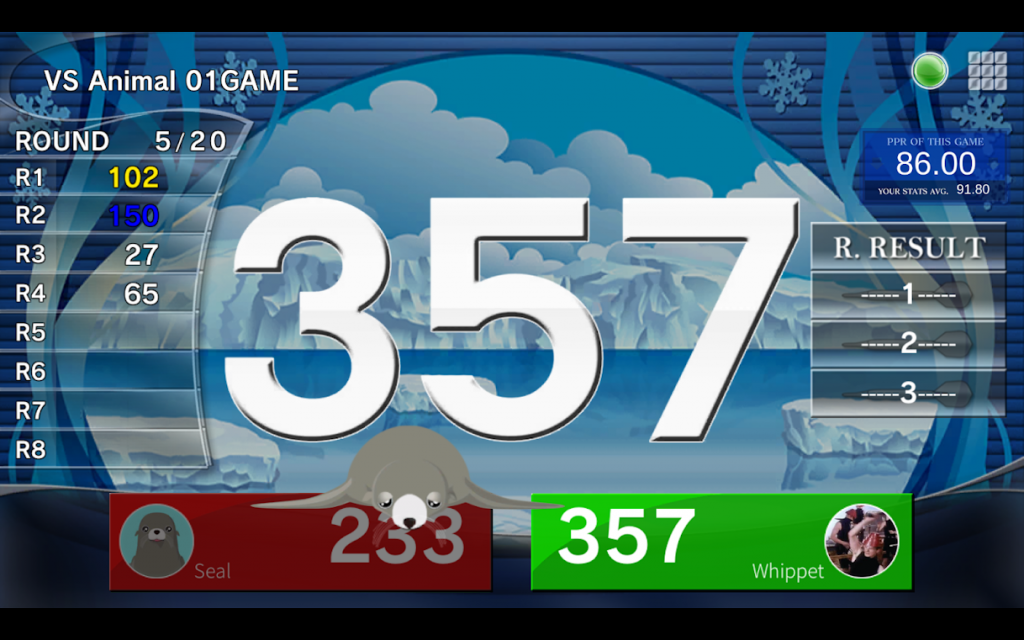 One round later, my average is now 86 and displaying in blue because it is less than my overall (30-game) average.

Here’s where things get interesting…

Your overall average – and the main average that is displayed mostly through the app and counts towards your rating – is your 80% average. That means it is all the darts you throw before you – or your opponent – gets within 20% of finishing the game.

More specifically, in a 701 game, once someone gets to 140 (or below), the 80% average is then locked in. Interestingly, if you go past 140 with your first dart of that round then your remaining two darts still count towards your 80% average. 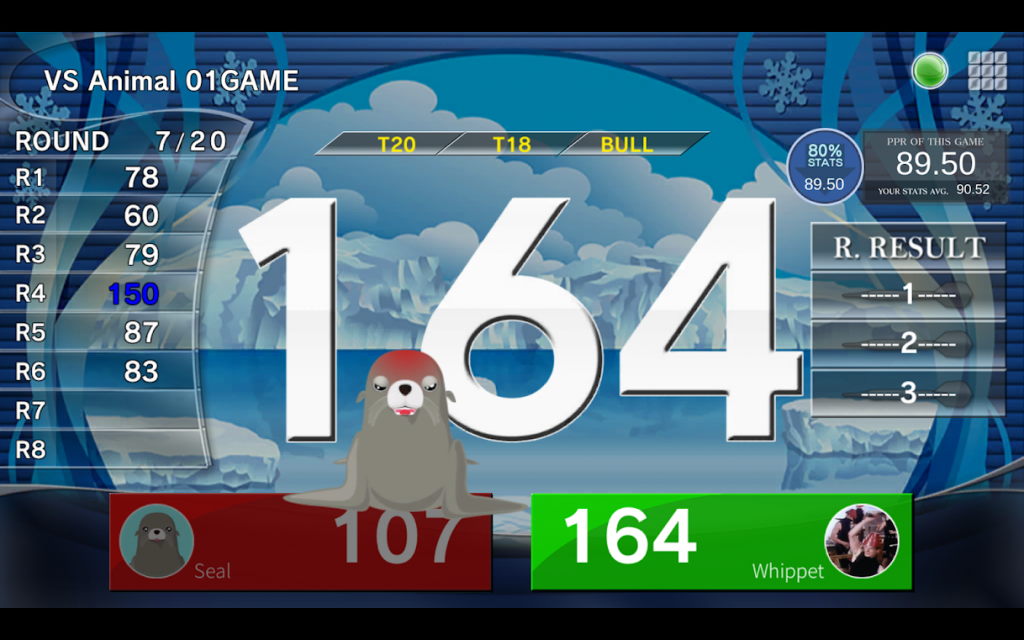 Now my 80% average is displaying in a new circle in the top right corner as my opponent (the seal) has gone past the 80% mark. It is locked in for me, even though I haven’t reached that 140 yet. 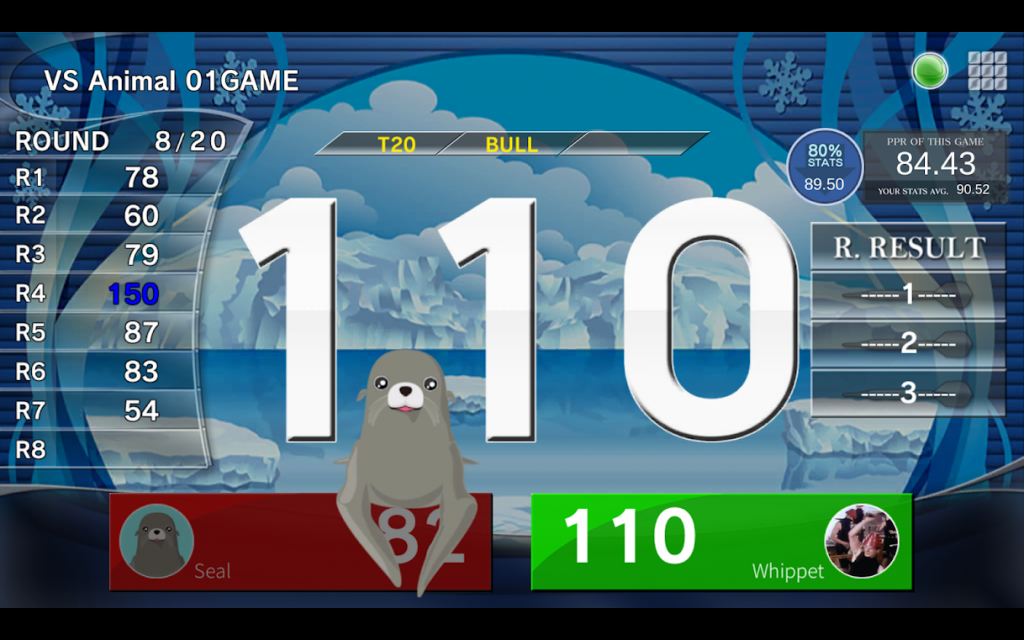 You can see after throwing again when my opponent had reached 80%, the box turns grey and displays your 100% average while your fixed 80% average is in the circle (which is blue because it is less than my overall 01 average).

Your 100% average is displayed at the end of the game and you can see your overall 100% average in the Stats section but it is not what your rating is based on, and not as prominent. When someone asks you for your average in soft-tip darts, they are almost certainly asking for your 80% average. It is therefore an indication of your scoring ability, not your finishing ability. 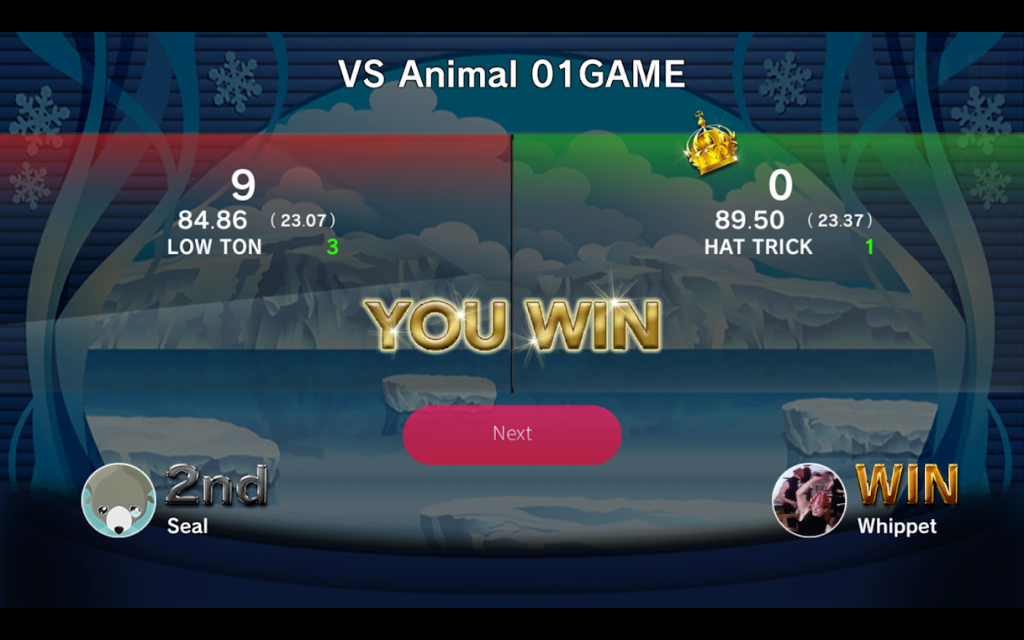 Now for Cricket, which is the other game that records your averages and counts towards your overall Gran Board rating. Now is probably a good time to mention that all the games in the Practice section and Party section don’t count towards your rating. It’s just 01 games and Cricket (against an opponent including the animals).

Average for Cricket is recorded by Marks scored. One mark is a single dart that is either opening, closing or scoring. A triple will count as three marks (unless it is closing and only one or two marks is needed to close). Therefore the highest amount of marks you can get in one round is 9.

Just like with 01, when playing a game, your current Cricket average per round is shown in a red, blue, green or grey box in the top right corner with your overall (last 30 games) average displayed much smaller under it. 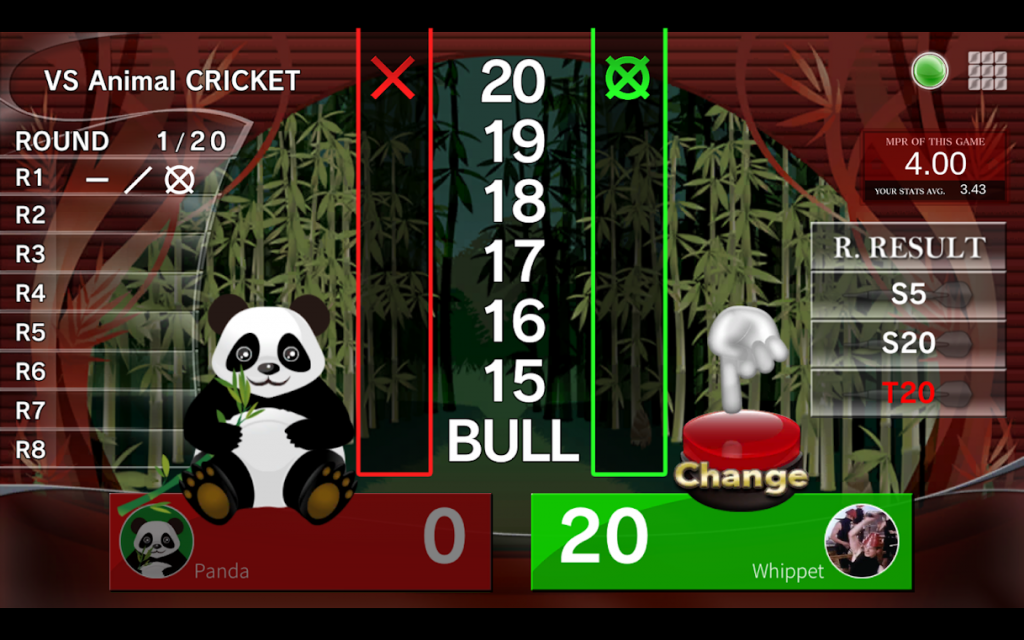 My current average for this Cricket game is 4, which is above my overall average and is therefore displayed in a red box. 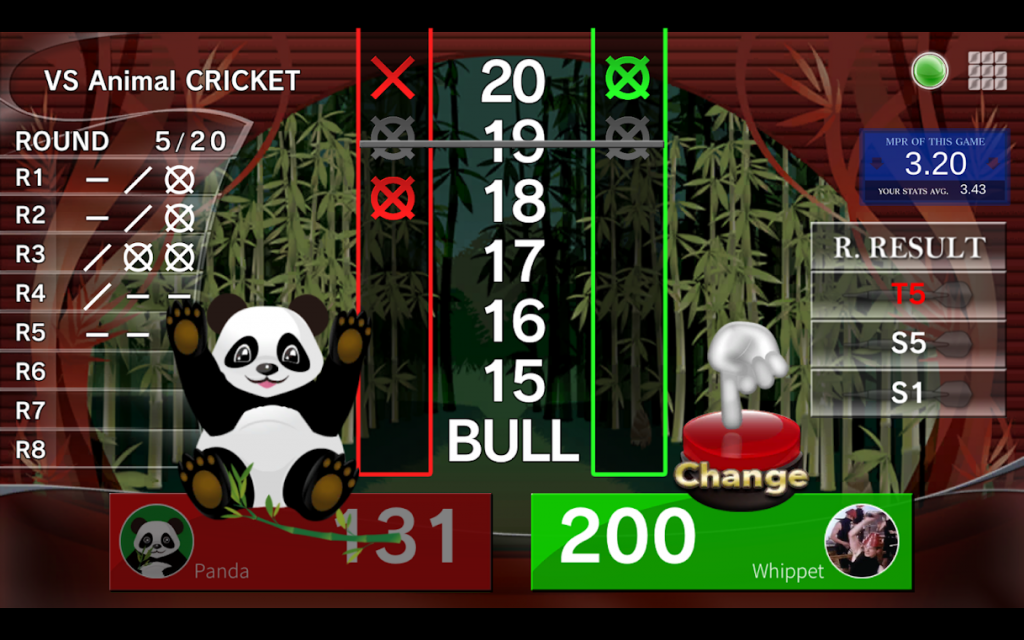 My Cricket average is now displayed in a blue box as it is less than my overall (30-game) average of 3.43.

Once again, it is the 80% average which is most prominent through the app, and what counts towards your overall rating.

However, with Cricket, the 80% average is not strictly 80%. It is actually once you – or your opponent – open or close 6 out of 7 of the segments in play. Six out of seven segments is more like 86% but hey, who’s counting 😛

Most commonly this will mean that once someone finishes all the numbers and gets up to the bull the 80% averages will be locked in. But if someone decides to go for the bull before anyone has finished the numbers then that person’s darts at bull would count to their 80% average. Also, if for example you have hit two bulls and two 15s with everything else open/closed that still won’t count as 80%… it’s only when six out of seven segments have been opened/closed. 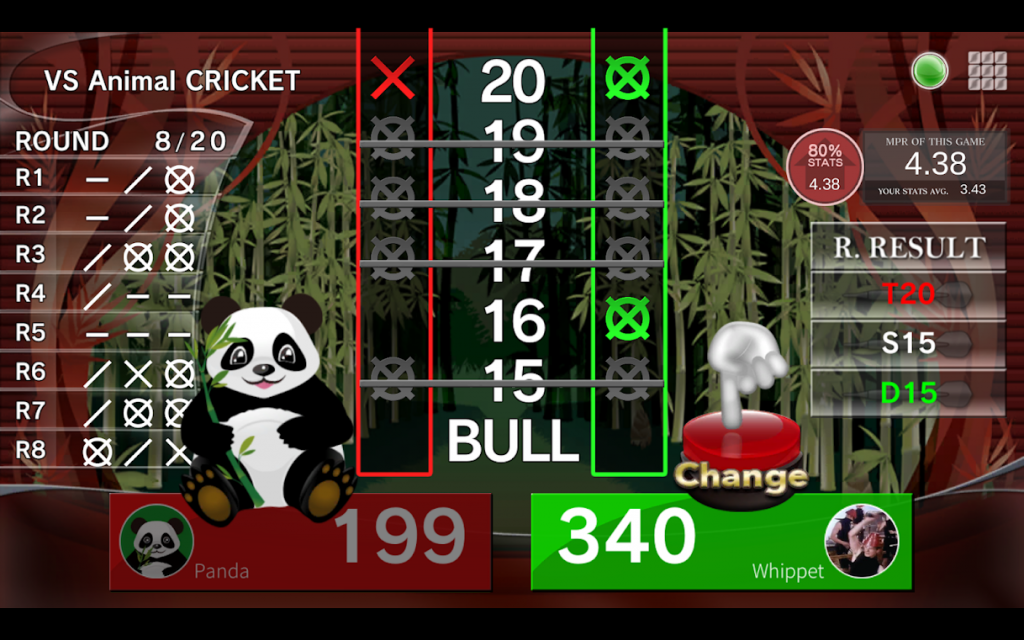 Once again, if you reach the 80% average with your first dart of a round, your remaining two darts WILL count towards your 80% average at the end of the game.

After the game, your 80% average displays prominently and your 100% average is in brackets. 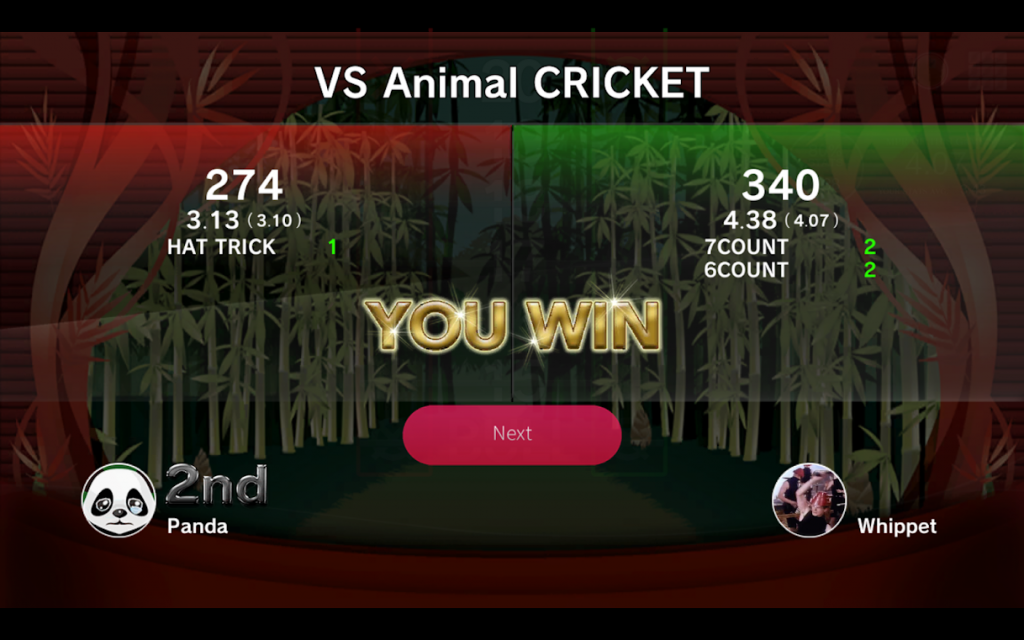 Phew… now to show you more about your overall stats and rating. 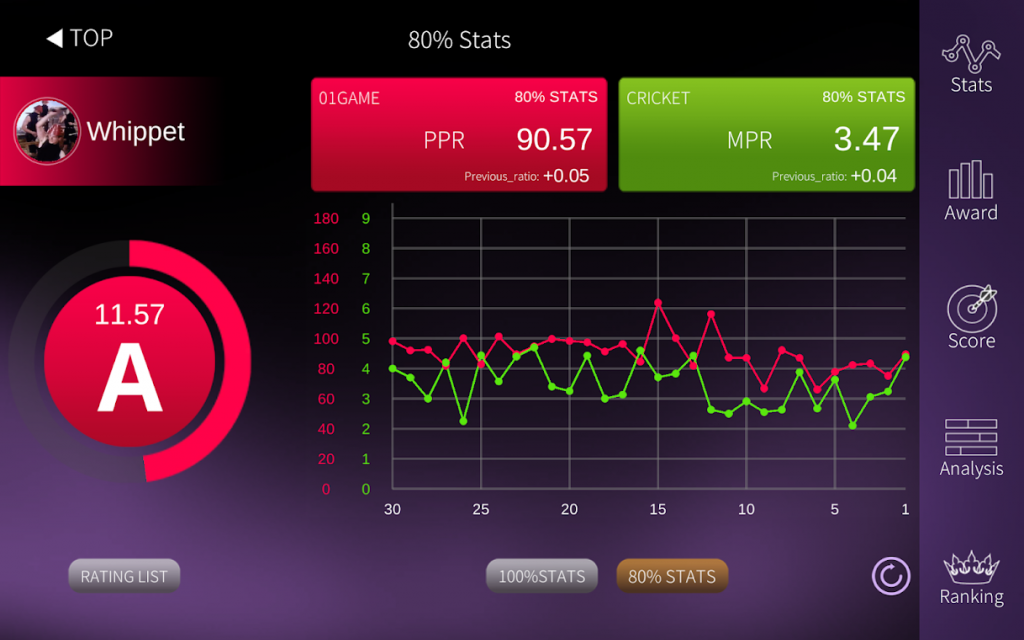 The first Stats screen on the Gran Board app displays your rating, 01 and Cricket averages and your 30 most recent average scores of each game.

When you go to the Stats section of the Gran Board app you’ve got a host of information available to you. The first screen that will come up is your current rating, your overall 01 average (80%) and your overall Cricket average (80%). There’s also a line graph showing the averages from your past 30 games of 01 (in red) and the averages from your past 30 games of Cricket (in green).

Side note: The only bit I don’t get from this screen is the + and – of Previous_ratio. I get what it is MEANT to do but it doesn’t seem to be accurate or I can’t work out over what time period it is showing. If you’ve cracked the code for that please get in touch with me here!

Those 60 games that display, which can also be displayed in list form by swiping right, are the ONLY ones that count towards your rating. It is not based on every game you’ve ever thrown, that’s why your rating fluctuates a fair bit. It’s representing your more recent form. 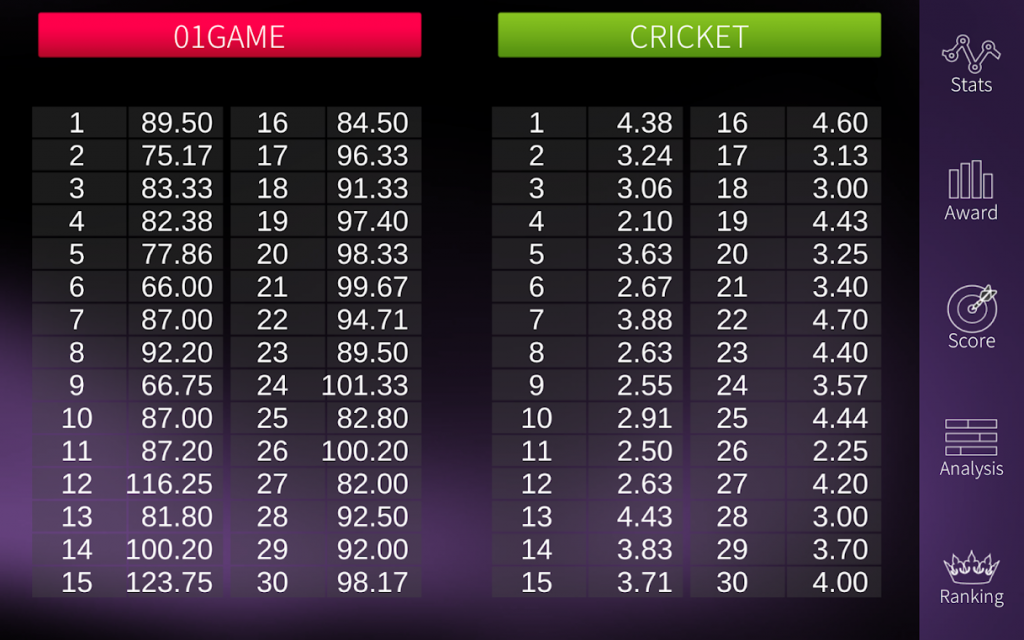 Swipe right to see your most recent 30 games of 01 and Cricket which make up your rating in list form. 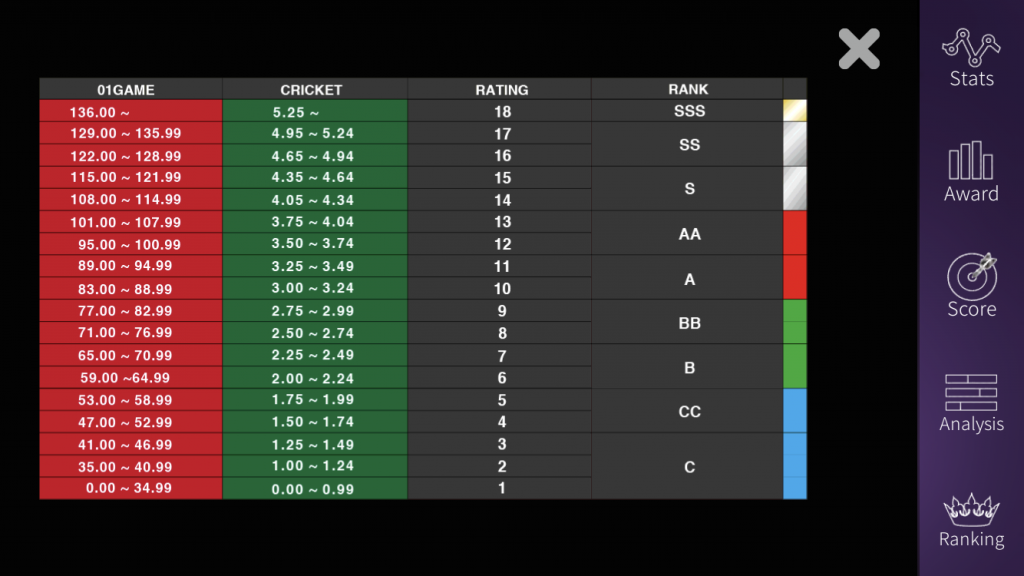 Gran Board ratings are based on this list of averages.

The other interesting thing (well it’s interesting to me anyway!) is that because only your most recent 30 games count, you can throw a great game but your overall average can still go down. That’s because it’s dependent on your 30th game that is dropping out of your total games. For example, let’s say your 01 average is 100, and 30 games ago you threw a game with a 130 average.  Then you step up and throw a 110 game, you’d be thinking ‘great, it’s above my 100 average’… but your average will go down because your 110 has replaced the 130 in your total.

If this is all still not enough stats for you, please go ahead and download the Gran Card app. It displays your 30 games in groups of ten which is quite an effective way of seeing whether you’re improving within your most recent 30. 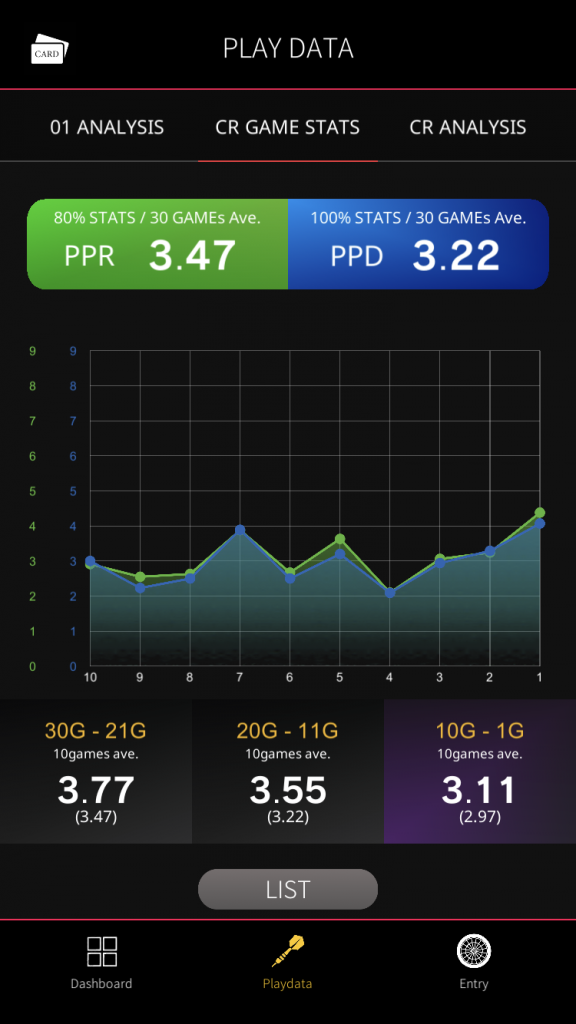 The Gran Card app displays your stats in a range of different ways including breaking down your most recent 30 games in groups of ten.

So that will have to do for now! I haven’t even touched on the fact that Gran Board records rankings in 01, Cricket, Practice game best scores, and total number of a host of achievements, and breaks them down by country on a weekly basis. But that might be for another article.

If you’ve enjoyed this analysis, please let us know and give us a follow on your favourite social media platform, we’re simply @nobulldarts. Or please jump on and have a game against us… on Saturday nights (South Australian time) you’ll find us in the No Bull Darts group lobby.