Granboard games review time! Check out all the other darts games that are offered – via payment – through the Granboard app.

In this 2-part article, Bandit tells us which games are worth shelling out your hard earned coin for. * (At the bottom of this article, he explains how to unlock all the games for free!).

Let’s start with the games located in the Practice section. Don’t forget there’s Rotation there that is a free download (and quite a good fun game) but the first one that is available to buy is called Multiple Cricket.

This is quite similar to Shoot Force (click here to read Whippet’s article on how to master Shoot Force), in that there is a multiplier that goes up each time you are successful in hitting your target, or goes back to x1 if you miss a target. Obviously this version is played with the Cricket numbers, however there are two random rounds thrown in where it could be any number on the board. These rounds have higher multipliers as well making it anyone’s game if you hit all three darts.

You also get penalised with minus x3 of the number you are going for if you miss all of your targets in a round.

This is a great game to use as a warmup before heading online. For the rating-A and above players, it offers an increased difficulty option where it only counts triples – everything else is counted as a miss. See the option settings below.

MULTIPLE CRICKET RATING. I’d give it a 7/10 for value for money as it doesn’t offer too much more than regular Shoot Force or a game of Delta Shoot. I would rate it 5/10 for originality/fun, but an 8/10 for replayability.

Next up is Pirates. Visually, Pirates looks quite good. It has a pirate ship center of the screen bobbing up and down and the aim is to sink as many ships as possible by hitting bullseyes. One bull won’t do it though as you need to score 200 points to sink a ship. Single Bull is worth 25pts and Double Bull is worth 50pts.

Sounds easy? Well yeah, it kind of is, so long as you’re good enough to consistently hit bulls. If you’re like me and can only average one bull out of three throws, then it’s gets boring pretty fast.

There are some lower-rank friendly options available where you can modify it so that single/double bull are worth 50pts, and inner single numbers are worth 25 pts. Alternatively, you can increase the difficulty by only counting the double bull as a hit. See options below.

As a single player game I can see this one getting fairly boring. It’s value comes when playing against an opponent (unfortunately not online) at home who is around the same rating as yourself. Then again, you could save your cash and just play Target Bull which comes free with the app.

The object of this game is to defeat 8 spiders. A number will appear on the spider web which is the target you need to hit with your three darts. You must get the number down to 0 exactly to exterminate the spider. Each spider has a higher number than the one before making it increasingly more difficult each round.

This is great practice for those ’01 finishes which, let’s face it, is the clutch point in all our darts tournaments. The game continues for either 15 rounds or until you exterminate all the spiders, whichever comes first. You also get bonus points for finishing the spider off with a double or a triple hit.

The options (below) include a hard mode, separate bull, master out and double out, which can be selected to add increased difficulty if you’re finding it too easy which is probably unlikely or just want to give yourself and extra challenge.

The music and sound effects are a bit average but help to create a bit of atmosphere. If they get too annoying you can just turn the volume down.

This game is good fun as a solo player or playing with friends and is definitely the one that I have come back to the most. I generally get through 4 to 5 spiders before it gets tough. If you’re only going to buy one extra add on game for your Granboard, this should be the one!

Are you a tight-ass like me and don’t want to use your own money to buy the add-on games but still want to play them on your Granboard app.

I use Android, and have downloaded Google Opinion Rewards. This is a survey system that gives you free cash that you can use in the Play Store.

Google Opinion Rewards, tracks where you have been and made purchases in real life (using Maps, Location Services, etc). All you have to do is when it offers you a Google Opinion Rewards survey, click on it, fill it out (usually takes about 20 seconds) and that’s it. You’ll instantly get anything from $0.10 to $1.50 per survey added to your account.

Depending on your country’s conversion rate, once you’ve saved up enough google play credit, you can then transfer that credit into Granboard coins via the Granboard coin store and unlock the extra games! Alternatively each game is only a couple of bucks and considering the app is free to begin with you could just buy the coins yourself and support the app developers in bringing us new content. 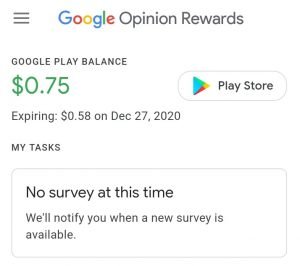 One thing I have learnt from experience though is don’t lie on your surveys to try to get more rewards. Google often does double checks and repeats surveys to see if you still claim the same information. If you try to lie about it you’ll stop getting offered surveys and therefore no rewards.